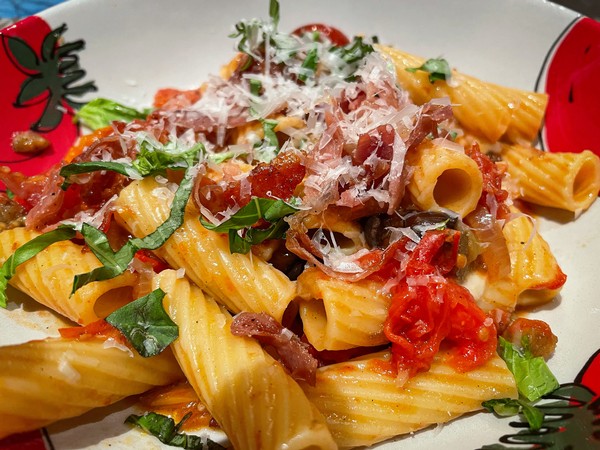 Step 1:
On a large rimmed sheet pan, toss the eggplant with 1/4 cup of olive oil and season well with salt and pepper. Spread everything evenly in one layer and roast until golden, 25-30 minutes, flipping halfway through to enssure even browning.

Step 2:
While the eggplant roasts, make your sauce: In a deep, 12 inch skillet, heat the remaining olive oil over medium . Add the prosciutto and cook, stirring occasionally, until it begins to crisp and brown in spots, 2-3 minutes. Remove from skillet and place on a paper towel-lined plate.

Step 3:
Add the shallot, garlic and chile to the pan and cook, stirring frequently, until the shallot has softened and the garlic is fragrant, about 2 minutes. Add the cherry tomatoes and cook until they start to burst, pressing the tomatoes gently down with the back of a spatula or wooden spoon to help them along, 5-7 minutes. You want some of them to collapse and some to maintain their structure. Stir in the diced tomatoes with their juices and season with salt and pepper. Simmer while the eggplant finishes roasting, about 15 minutes more.

Step 4:
While you're making the sauce, bring a large pot of well-salted water to a boil. Add the pasta and cook according to package instructions until al dente. Reserve 1 cup pasta cooking water, then drain pasta.

Step 5:
When the eggplant is done, add it to the tomato sauce and stir to combine. Add the pasta and toss until everything is well coated with sauce, adding more pasta water if needed. Stir in the mozzarella and toss until it begins to melt.

Step 6:
Serve in the skillet or in bowls and top each portion with crispy prosciutto and fresh herbs. Season with flaky salt, if using.