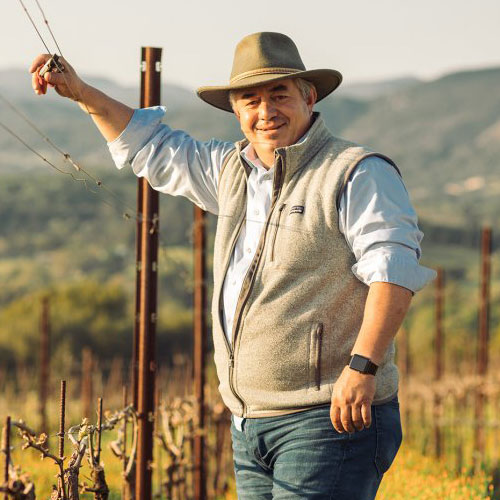 Born in and raised in the Mexican state of Michoacan, Winemaker Rolando Herrera arrived in California at the age of 15 and took a job in Napa, CA as a dishwasher at Auberge Du Soleil. Soon thereafter he began his first winery job building a stone wall at the home of Stag’s Leap Wine Cellar Founder, Warren Winiarski. Inspired by Rolando’s work ethic, Mr. Winiarski offered him a job working harvest that year. Rolando spent 10 years working at Stag’s Leap including 7 years as the Cellar Master. His time at Stag’s Leap lead to a position as the assistant winemaker at Chateau Potelle and ultimately, his first winemaker position at Vine Cliff. Much of what Rolando learned about the “art” of winemaking and indigenous yeasts came from his time at Chateau Potelle and today Mi Sueño’s portfolio is crafted using predominately native yeasts Paul Hobbs had become a friend and admirer of Rolando’s work and in 2001, hired Rolando as the Director of Winemaking at Paul Hobbs Consulting. In 2004, Rolando left Paul Hobbs Consulting to spend 100% of his time on the Mi Sueño portfolio (Mi Sueño began in 1997 as a side project while at Chateau Potelle). Rolando was first introduced to Rich Aurilia and Dave Roberts in 2007 and is excited to bring his winemaking expertise to the Red Stitch Team.